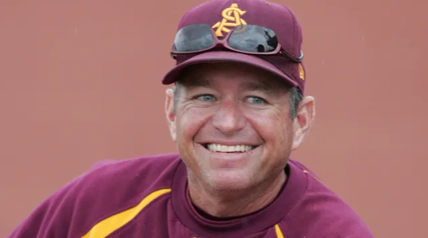 Tim Esmay – a long time Valley of the Sun baseball symbol – will lead the Hitting Institute Player Academy program as announced by Orson Kinney, General Manager of the organization. “I am happy to announce that Tim Esmay, former head coach of our ASU Sun Devils will be directing the Hitting Institute Academy program as well as assisting in Twisters Baseball Club instruction,” wrote Kinney to his club members.
Briefly, Tim played locally at Horizon High School then on to Scottsdale Community College in 1985, then on to the Sun Devils in ’86-’87.  From there he got into coaching and after 8 years at the University of Utah he made his way back to ASU as an assistant coach in 2005. Among other highlights, he led the Devils to Omaha in 2010 as the Head Coach as the number 1 seed. He then went on to coach in the White Sox organization.
More Highlights:
– 2nd fastest coach in ASU history to win 100 games.
– 2nd highest winning percentage at 100 wins (.810)
– Had a 24 game win streak, breaking the school record set in 1961 for most consecutive victories to open a season.
– In 2010 the Devils finished the regular season with a 52-10 record, including a 20-7 mark in Pac-10 play.
– Received the 2010 Pac 10 Coach of the year award
– Received the 1997 Louisville Slugger WAC Coach of the Year while at Utah.
– Inducted into the Scottsdale Community College Hall of Fame in 2011. He hit .397 during his career at SCC and is still the school’s record holder for career doubles.
–  Graduate of Horizon High School, where his number 5 was retired in 1998.
– Coached at Brophy College Prep in Phoenix for two years (1992-93).
– Assistant at Grand Canyon University (1995) and Utah (1996) before taking over the head job in Salt Lake City in 1997.